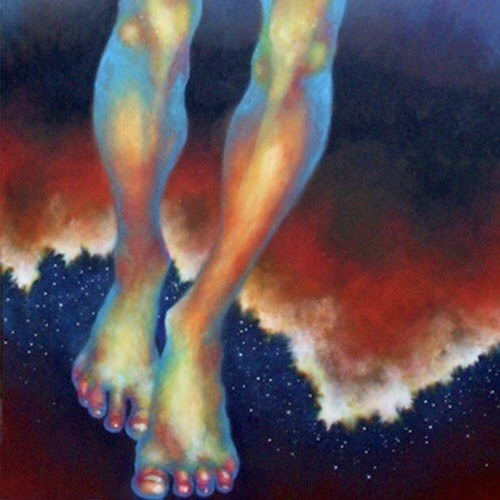 “Dreamwalking is an altered state of heightened consciousness while in the pure observer state, it can occur while in another timeline, reality or exist outside of time. While in this altered state, we can bring that which was unconscious into our conscious awareness, so we can directly participate with that content while in our higher consciousness. The path of awakening is to bring that which is unconscious into consciousness, in order to heal the darkness or reveal the deception in order to see the greater truth. This is the state of bringing the eternal light to illuminate the shadows of darkness, thereby alchemically transforming its nature to reflect the higher truth, as the light shines upon it.”

Ascending humans are evolving into developing new abilities that change the characteristics of what it means to be human, from Dreamwalking, to Transfiguration, Translocation and Transmigration. These are revealing more of the Diamond Sun templates function as a consciousness transport between time fields, to further understand what true freedom is. This month’s newsletter will attempt to bring awareness to these multi-dimensional changes, and the opportunity we have to consciously participate as the living expression of the changing Law of Structure.

As the quantum field impacts the organization of space and time, those of us on the Ascension path may be more easily entering altered consciousness states that could be defined as dreamwalking. In this definition, the function of dreamwalking is not entering or interfering with any person’s dreams. As a spiritual initiate, when dedicating our consciousness to serve unity, while on the path of earth service, we discipline ourselves to master states of compassionate selflessness. We are connected, listening and feeling into our internal guidance systems at all times. This means we are mindful of the direction of our consciousness energies, and we work towards transcending our thoughts beyond personal material concerns, rising above the many pitfalls of the negative ego games played in the material world. As we develop ourselves spiritually, and the inner inspiration to be of service increases with greater passion, many of us will find ourselves in the dreamwalking or remote viewing consciousness state in more spontaneous ways.

Dreamwalking is to walk or transport one’s consciousness to observe and heal the patterns and events transpiring in many alternate realities and timelines. To see the nature of the structure of what created them and to partner with God to find and remove reality boxes or dark portals that are used as consciousness traps. Dreamwalking is an altered state of heightened consciousness while in the pure observer state, it can occur while in another timeline, reality or exist outside of time. While in this altered state, we can bring that which was unconscious into our conscious awareness, so we can directly participate with that content while in our higher consciousness. The path of awakening is to bring that which is unconscious into consciousness, in order to heal the darkness or reveal the deception in order to see the greater truth. This is the state of bringing the eternal light to illuminate the shadows of darkness, thereby alchemically transforming its nature to reflect the higher truth, as the light shines upon it.

We may prepare for entering this state by opening into deep prayer, meditation and focused attention, which may help us to inspire creativity, healing, knowledge, communication and exchanges with other beings. Indigenous peoples, Native Americans, Aborigines, Tibetans and the Celtic peoples are the earth tribes which carried the codes of the dreamwalkers in time, and were helping to protect the earth by keeping this genetic pattern alive and its memory available for the human race during the Dark Age. The earliest dreamwalkers after the cataclysm, were the women of this earth that formed from the Grandmother Turtle Codes that were carried over from Lemuria’s matriarchal society, to keep this secret consciousness knowledge away from the invaders. Lemuria suffered a great holocaust to obliterate the power that the women had developed on the earth, with Dreamwalker and Essene Templar abilities. As the Mother principle and daughter codes surface onto the earth from deep within the Crystal Caverns, this codified language is returning to some of the women or men in their current embodiment, that were incarnated at the time or who are descendants of those original tribes in Lemuria. This group of dreamwalkers have returned to help restore the balance of the divine feminine principle on the earth, and many are found in the Native American or aboriginal culture.

In the higher dimensions of creation, when we hold the energetic signature and feeling of a person, place or thing, our consciousness is automatically transported to wherever they are located. Consciousness Transport can happen while awake, asleep, in altered states or by intently focusing on a certain person or situation, such as focusing on a physical location or timeline on the earth body. An example is that we can transport our consciousness energy when we hold intent to connect with a city, historical site, power spot or megalithic structure, especially when we are dedicated in service to unity. Consciousness transference states, such as dreamwalking, are more natural states for those in the awakening groups of Indigos or Starseeds. Consciousness Transport and transference states can be learned and developed through any kind of practice in which the person, uninitiated or initiated, seeks to gain deeper knowledge of the state of unity that exists between God and Self. However, many Starseeds and Indigos have developed these consciousness transport skills through previous incarnations where mental mastery, polarity integration, love and devotion, were a way of life in the higher realms of existence. As a result, Dreamwalking and Consciousness Transport can happen with or without applying direct effort and intention to do so, as it is a function of the memories that are coming online that are recorded with higher genetic imprints. These dormant skills become awakened in people during the Ascension Cycle.

Gridworkers are often engaged in a variety of forms of Consciousness Transport, in order to hold observer point and compassionate witnessing of the events recorded in time that have occurred in the past or future, to impact the histories of the human race evolution on the earth. The act of observation collapses certain wave potentiality that makes a situation, event or object become physical or change in ways that shift the timelines, and this is not measurable by current science. It is a direct function of higher consciousness embodiment to shift timelines from destructive probabilities or annihilation, by restoring harmony and energetic balance between the polarities. When we observe electromagnetic wave-forms, archetypal patterns and the creational myth or dream symbols active in the field, we can change the physical environment and how that Electromagnetic Signals or pattern is being expressed in the manifest. The act of Compassionate Witnessing during consciousness transport, such as dreamwalking, allows us to witness what has happened to the earth body, where the earth was damaged, and the blueprint content that influences the direction of the collective consciousness of humanity. Where the earth has been damaged, is also the location of tremendous amounts of human pain that is stuck in that area. As a result of this trauma, the accumulated collective human soul pain has been made into energy harvesting stations for the NAA.

While dreamwalking the earth Timelines, we are able to source the origin of who, what and where in the creation stories, the dreamtime narratives or creational myths are recorded in that section of the planetary body and its network. Sometimes, we can track the transmission source to off planet structures like constellations, messier objects, planets and other astronomical bodies. The collective human race is directly impacted by the content transmission, such as creation myths, archetypes, numerical coding, and mind control frequencies, which get recorded into the blueprints and timelines of the earth. As has been described, many of the planet’s morphogenetic fields were abused with inserts of alien code used by the Controllers for mind control programming, to promote collective archetypes that control the minds of the people on the earth. Essentially, this combination of archetypal patterning for exerting control over the minds of the people, has manifested distorted behavioral Human Race Phenotypes, where traits belonging to the reptilian and Refugee Races have been imprinted on the human population.

While dreamwalking, it is possible to observe any kind of event that occurred in a location that has recorded collective consciousness archetypes, symbols, number codes, geometric patterns, Holographic Inserts and the narratives they create, to influence the minds and control the operating consciousness levels of the people on the earth. [1]