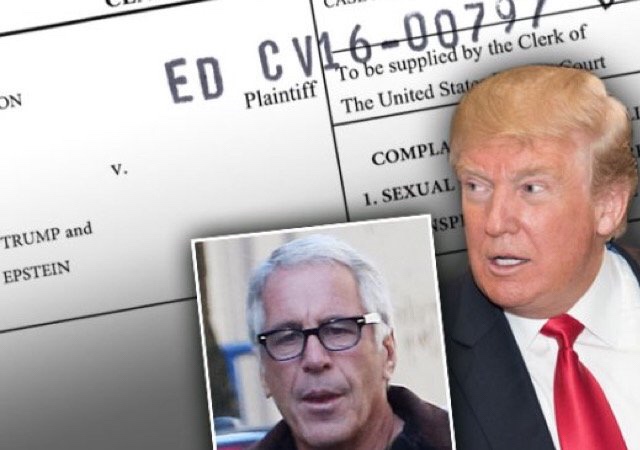 When Mike Pompeo said COVID was a “simulation”, Trump said, “I wish someone had told me.” His role was to pretend to be the ‘good cop’ while giving the store to his fellow Satanists. Thus he failed to ensure the integrity of the 2020 election. In 2017, we wrote:

“Trump’s job is not to lead us to the Promised Land. His job is to polarize and divide.  They are all Freemasons: Trump, Hillary, Putin, May, Merkel, George Soros, Netanyahu etc. Most members of Congress are. Stalin, Hitler, FDR and Churchill were.  The goal is conflict itself – gridlock, war, and chaos. Ordo ab Chao.

They are transforming the world. War and mayhem are how they do it.

Freemasons have divided into Communist and Zionist house teams. Freemasons and Illuminati Jews are on BOTH sides of every conflict.  (See also- Profumo Affair Exposed Masonic Conspiracy)

In case Trump insisted on the true election result, there was sexual blackmail to keep him in check.  Blackmail is a price of admission to the Illuminati. Trump was false opposition.

If Patriots look to him for leadership, they are doomed. 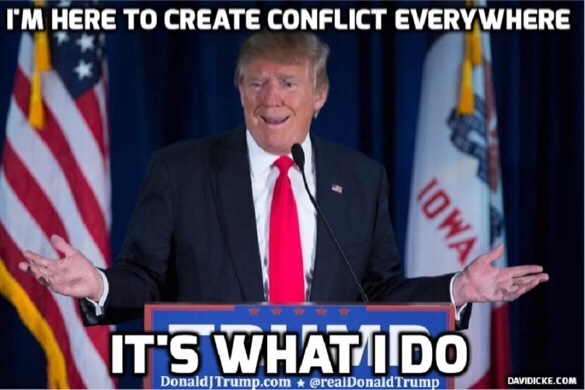 (Trump admits he is a Freemason at 3 min)

Update – It’s all a Charade: Soros and Trump are Business Partners

Every person in a position of power should be suspected of being controlled through [sexual] blackmail since the Judeo-masonic cryptocracy controls virtually every aspect of organized government, the press, and the financial system, to name a few. You may have heard of the bizarre sexual initiation of Yale University’s Skull and Bones secret society, where the would-be Bonesman reveals his sexual secrets to his fellow initiates and initiators. From the very start of their societal ascent, you could say, a Bonesman is blackmailed and falls under the control of the society.

This scenario is played out in virtually every sphere of influence at one degree (pun intended) or another. As it happens, both presidential candidates are connected to sexual scandals, the likes of which we shall explore in Trump’s life.

On April 26, 2016, a “Katie Johnson” filed a rape complaint in a California Court against defendants Donald Trump and Jeffrey Epstein. The complaint was dismissed by a judge due to a lack of plaintiff address, not due to any frivolity of the complaint. Trump supporters were quick to dismiss the charge, however, the lack of address on behalf of the plaintiff could have been due to fear for her life. 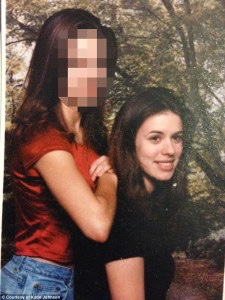 (Katie Johnson, right, as a teen)

Incidentally, Trump has flip-flopped on his abortion stance. Of course, how could Trump ever ban abortion? What would 13-year-old rape victims do then?

“Plaintiff was subject to acts of rape, sexual misconduct, criminal sexual acts, sexual abuse, forcible touching, assault, battery, intentional and reckless infliction of emotional distress, duress, false imprisonment, and threats of death and/or serious bodily injury by the Defendants that took place at several parties during the summer months of 1994. The parties were held by Defendant Epstein at a New York City residence that was being used by Defendant Epstein at 9 E. 71st St. in Manhattan [known as the Wexler Mansion]. During this period, Plaintiff was a minor of age 13.”

An alleged witness, Tiffany Doe, to the above rape has come forward. She claims she was paid by [Jeffrey] Epstein to lure underage girls to Epstein-and-friends parties with the bait of promised modeling opportunities. 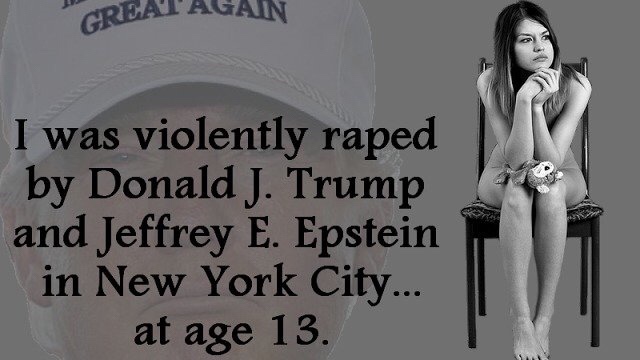 Tiffany Doe goes on in her affidavit to identify a 12-year-old victim of Trump and Epstein as well as to witness Epstein making death threats to the girls should they reveal the abuse. A second witness to the original Jane Doe (previous pseudonym Katie Johnson) corroborates the story of both Johnson and her lurer. The case remains open.

Yet another corroborating detail of Trump’s alleged sexual history includes his own wife–at the time, Ivana–accusing him of raping her in 1989. Perhaps convenient for Trump, Ivana somewhat recanted this accusation in July, 2015, just in time for the presidential race.

Publicly, Trump has made some disturbing, incestuous comments about his own daughters, at one time discussing the potential breast size of his then-infant daughter Tiffany and also claiming that he would be dating daughter Ivanka had he not been her father. Normally when you hear someone talking about legs and breasts, it’s not a parent talking about their infant daughter. Trump thinks this way because that is what must always be on his mind, regardless of age and regardless of kin. Almost every time he publicly talks of Ivanka he can’t help but compliment her body. 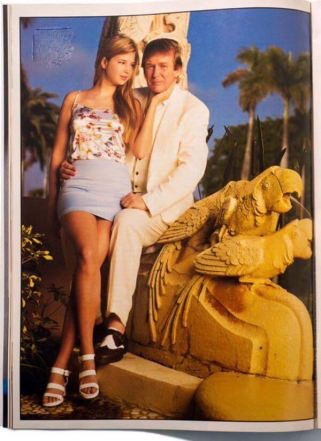 One cannot rule out the possibility that Ivanka is the victim of sexual abuse and mind control, although there is nothing directly suggesting this (the CIA’s MK-Ultra program is alleged to have prostituted to children, sometimes with the help of the children’s own parents, to politicians and persons of power). Trump’s posed photo with then 15-year-old Ivanka, where she is wearing a short skirt and slinky top without a bra whilst perched atop copulating birds, doesn’t help Trump’s avoidance of incest suspicion or MKUltra abuse. Interestingly, Ivanka’s slinky top is covered with butterflies, symbolic of beta kitten programming. Ivanka’s personal contact information was found in Epstein’s black book.

A video recently surfaced showing Donald Trump telling a pre-teen girl that he would be dating her in ten years–just one more piece of evidence that Trump is a sexual predator[xix]. In 2003, Trump went on the Howard Stern show and talked about how hot Paris Hilton was when she was 12.

“I’ve known Paris Hilton from the time she’s 12, her parents are friends of mine, and the first time I saw her she walked into the room and I said, “Who the hell is that?’ Well, at 12, I wasn’t interested,” Trump said. “I’ve never been into that… but she was beautiful.”

Trump told Stern in that same interview that he had watched Hilton’s sex tape. Big surprise there. What we basically have here is the American version of Jimmy Savile in Donald Trump!

A week before the U.S. federal election, Katie Johnson, the woman who filed a lawsuit alleging that Donald Trump raped her when she was 13 at an Epstein sex party in New York, cancelled a press conference, at which she was to reveal her identity (the conference would precede the approaching pre-trial in December of this year). On November 2, Johnson’s legal representative, Los Angeles civil rights attorney Lisa Bloom, told a press scrum at her Woodland Hills, Los Angeles offices that Johnson would not be appearing due to fear of her life following threats:

“I have bad news. Jane Doe has received numerous threats today as have all the Trump accusers that I have represented.”

Then, only three days before the election, Johnson withdrew her lawsuit against the would-be President of the United States and his longtime friend Jewish billionaire and convicted child sex trafficker Jeffrey Epstein, who raped Johnson and other young girls while having them play out role-playing fantasies.

That the dropping of the suit was a huge convenience for Trump and his eventual election goes without saying. Johnson’s deposition stated that Trump and Epstein threatened her life and those of the other child victims if they were to reveal the crime. It appears that, with this decades’ old threat, they finally got to Johnson and her lawyer in time for the election.

The mainstream media was mysteriously silent on the Johnson lawsuit, with the Daily Mail being the main conduit to disseminate information to the public regarding the case. The Daily Mail’s last article on the Johnson-Trump rape scandal was published on Nov. 7, 2016, the eve of the election, with the deceptive headline of “EXCLUSIVE: Troubled woman with a history of drug use who claimed that she was assaulted by Donald Trump at a Jeffrey Epstein sex party at age 13 MADE IT ALL UP”.[xi]

Notice that the writer of the article headline used all uppercase letters for the lie they told. The article never conclusively proves that she made up her story. Nowhere does Johnson say she made anything up, yet the Daily Mail crafted this politically-motivated, click-baiting headline to suggest otherwise. The Mail also slanted the story to suggest that Johnson’s claims were that of a drug-riddled, troubled person. If this is true, it is not an uncommon result for rape victims. 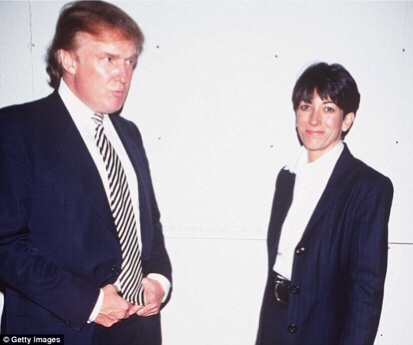 In truth, the Daily Mail was counting on people reading only the dismissive headline rather than reading the article and weighing the evidence and deciding for themselves. … Furthermore, the Daily Mail itself spoke with Epstein procurer “Tiffany” who corroborated Johnson’s entire story, which just happens to corroborate Virginia Roberts proven claims against Epstein. It seems the Daily Mail was given a last-minute directive (by Mossad?) to exonerate Trump, thus the Mail’s sudden and unsubstantiated dismissal of Johnson’s claims. Ironically, child-sex procurer Ghislaine Maxwell’s Mossad-asset father Robert Maxwell controlled much of Britain’s media at one time. It’s likely that Britain’s media, today, is still in similar hands, thus the dramatic U-turn by the Daily Mail in the Johnson case.

Adding to the disinformation surrounding this case is the double standard held by Trump supporters and the pseudo-alternative media. Rape allegations–all of them–against Bill and Hillary Clinton are fair game but any against Trump are off limits.

Related- Netanyahu an Example for Trump? 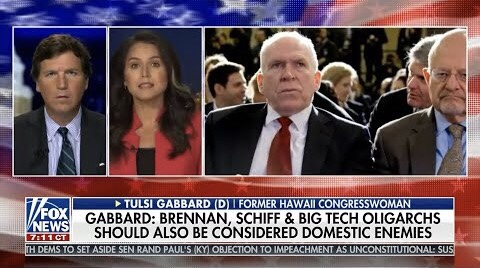 “President Biden, I call upon you and all members of Congress from both parties to denounce these efforts by the likes of Brennan and others to take away our civil liberties endowed to us by our Creator and guaranteed in our Constitution. If you don’t stand up to these people now, then our country will be in great peril. Your leadership is needed now to denounce those like John Brennan & Rep Schiff who are advocating for targeting half the country as potential domestic terrorists. Truly unite the American people around our Constitution & the rights that are endowed to us by our Creator.” 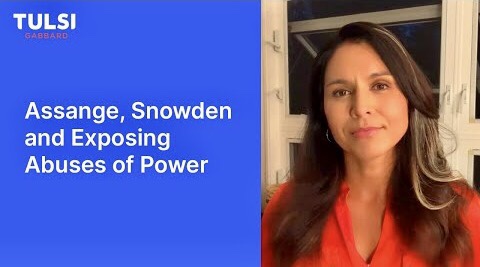 In 1971, Daniel Ellsberg leaked the Pentagon Papers, exposing lies and war crimes committed by the U.S. Government intended to escalate the war in Vietnam. He became the first person charged as a source for violating the Espionage Act.

In 2010, Julian Assange and WikiLeaks released cables and documents showing war crimes against civilians in the Middle East.

And in 2013, Edward Snowden leaked thousands of documents, opening the nation’s eyes to the illegal and unconstitutional mass surveillance of Americans by security agencies.

All three of these brave whistleblowers took great personal risk to hold those in power accountable for their actions. Yet, all three have been prosecuted under the Espionage Act — a law written in 1917 that prevents those accused under it from having a fair day in court.

But as we have clearly seen time and time again, the First Amendment and a free press are fundamental to forming a more perfect union. This freedom must be fiercely protected, not undermined.

This is why Tulsi introduced H.R. 8452, the Protect Brave Whistleblowers Act, which would allow whistleblowers like Daniel Ellsberg, Julian Assange, and Edward Snowden to have a fair day in court by allowing them to defend their actions and state their motivations in a legal defense. She also called for the charges against Edward Snowden and Julian Assange to be dropped immediately with bipartisan House Resolutions 1162 and 1175.

Let’s stand with Tulsi and urge Congress to stand up for the American people, stand up for our freedoms, give these brave Whistleblowers a fair day in court, and pass this critical legislation now. 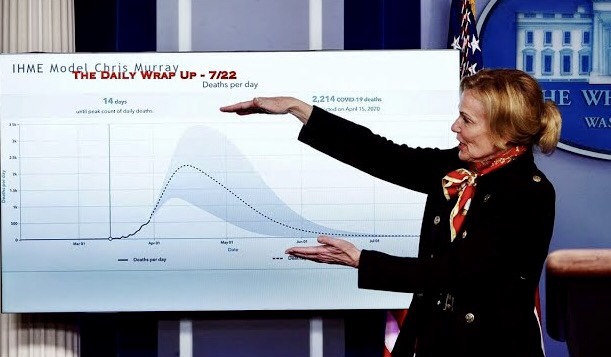