“I came up with a vaccine, with three vaccines. Came up with three of them in less than nine months. It was supposed to take five to 12 years. I’m the father of the vaccine because I was the one that pushed it. I pushed the FDA like they had never been pushed before and that’s why we have it. I hope everyone remembers. So everybody, go get your shot.”

The mass formation psychosis and maybe white savior mentality has caused many to follow Trump and many leaders like him (i.e., Biden, Fauci/Gates). They stir up emotions, promise to “save” you from “fill-in-the-blank” but end up doing the exact opposite of what they promised. It’s an abusive relationship with the government and they are counting on you to play the victim role.

We now know what Fauci did during the AIDS crisis when he tried to “save” us from that virus. He experimented to death orphaned Black and Hispanic children. Similarly, Gates has tried to “save” Africans from “fill-in-the-blank”, but ended up killing more children than the diseases.

Now Biden and Fauci/Gates want “to save Republicans’ lives.” They recently praised Trump for his “Operation Warp Speed”, for his promotion of the safety and effectiveness of the vaccines, and for being vaccinated and boosted.

They have been waiting and hoping for Trump’s charisma to help increase vaccinations among his followers. No doubt Trump would take a victory lap or two for the vaccine’s rapid development — probably his greatest achievement as president. Trump is very proud of having orchestrated the roll-out of the COVID-19 vaccinations in “Warp Speed”.

Is Trump still proud of these vaccines?

Trump had said in the past that he was opposed to promoting the vaccines for fear that he would lose his base supporters. He must have changed his mind with his recent comments stating he is proud of the COVID-19 vaccines, claiming that there are no serious side effects or deaths from the vaccines.

Trump’s Surgeon General, Jerome Adams, stated Trump waited to come out as pro-vaccine until after Biden praised him for his work in getting the vaccines to the public. Jerome also believes vaccine mandates are effective for adults and children.

When Trump stated he received his booster, he seemed to belittle those who booed in opposition as “just a tiny group”, even though most of his supporters are considered anti-vaxxers. (Note: Not all anti-vaxxers are Trump supporters, and possibly most are not.)

In Candace Owens’ recent interview with Trump, he seemed to double and triple-down on his pro-vaccine stance. Trump said “Vaccines are good, and people should get them.”

Candace followed-up the interview with an Instagram video to her followers making excuses for Trump’s vaccine stance saying he is pro-vaccine because he isn’t aware of the known side effects, because he is sheltered and doesn’t keep up with the topic, and doesn’t do research on the internet. All of these excuses seem implausible since he has always been keenly aware of current news, the “fake news”, and any news that relates to “voter fraud”.

He is not taking up our fight.

He seems to pretend to be clueless.

Why do people make excuses for him and continue to support him? Has he brainwashed his followers to follow him at all costs, even if he stands against something they feel so strongly against?

Remember, he did state during an election rally that “I love the poorly educated”.

Does he think his followers are poorly educated?

Trump also believes “his vaccines” have saved millions of lives. New York Times’, Maggie Haberman, asked Trump’s representatives if he was going to play ball with his anti-vaxx followers, and she was handed a handwritten note with Trump’s signature in response. The note stated: “Must tell the truth — and very proud to have produced the 3 vaccines so quickly. Millions of lives saved worldwide. Best wishes, Donald.”

Is his promotion of the COVID-19 vaccines part of the con game?

Now that we know Trump is pro-vaccine because he believes “vaccines save lives, have no known side-effects and don’t cause death”, why would he not be pro-vaccine-mandate? Haven’t we heard this before: The vaccines are safe and effective; we won’t mandate them. Now, there are mandates.

Will Trump’s next surprise statement be that he is pro-vaccine-mandate, and will that announcement come before or after he is elected President in 2024? Are you willing to wait and find out? 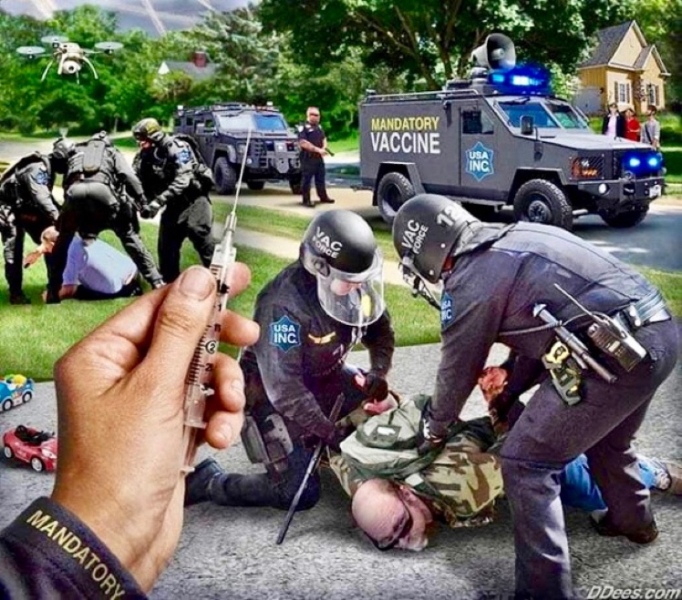 Is there now no difference between Biden and Trump, or Democrats and Republicans, when it comes to COVID-19 vaccines? It seems there is not any difference, they all promote that COVID-19 “vaccines” are “safe and effective”.

I guess Trump was right about one thing, we are all poorly educated.

We are having a national security crisis because we are allowing the government to take away our freedoms.

It is time for all to take action before we permanently lose our freedoms and our country. Trump is not the answer, as you may be starting to understand. Do not feel abandoned. Come together and support Defeat the Mandates.

Can we forge against these enemies a grand and global alliance, North and South, East and West, that can assure a more fruitful life for all mankind? Will you join in that historic effort The energy, the faith, the devotion which we bring to this endeavor will light our country and all who serve it — and the glow from that fire can truly light the world.

Each individual must take up their own fight.

Will YOU take up the fight?